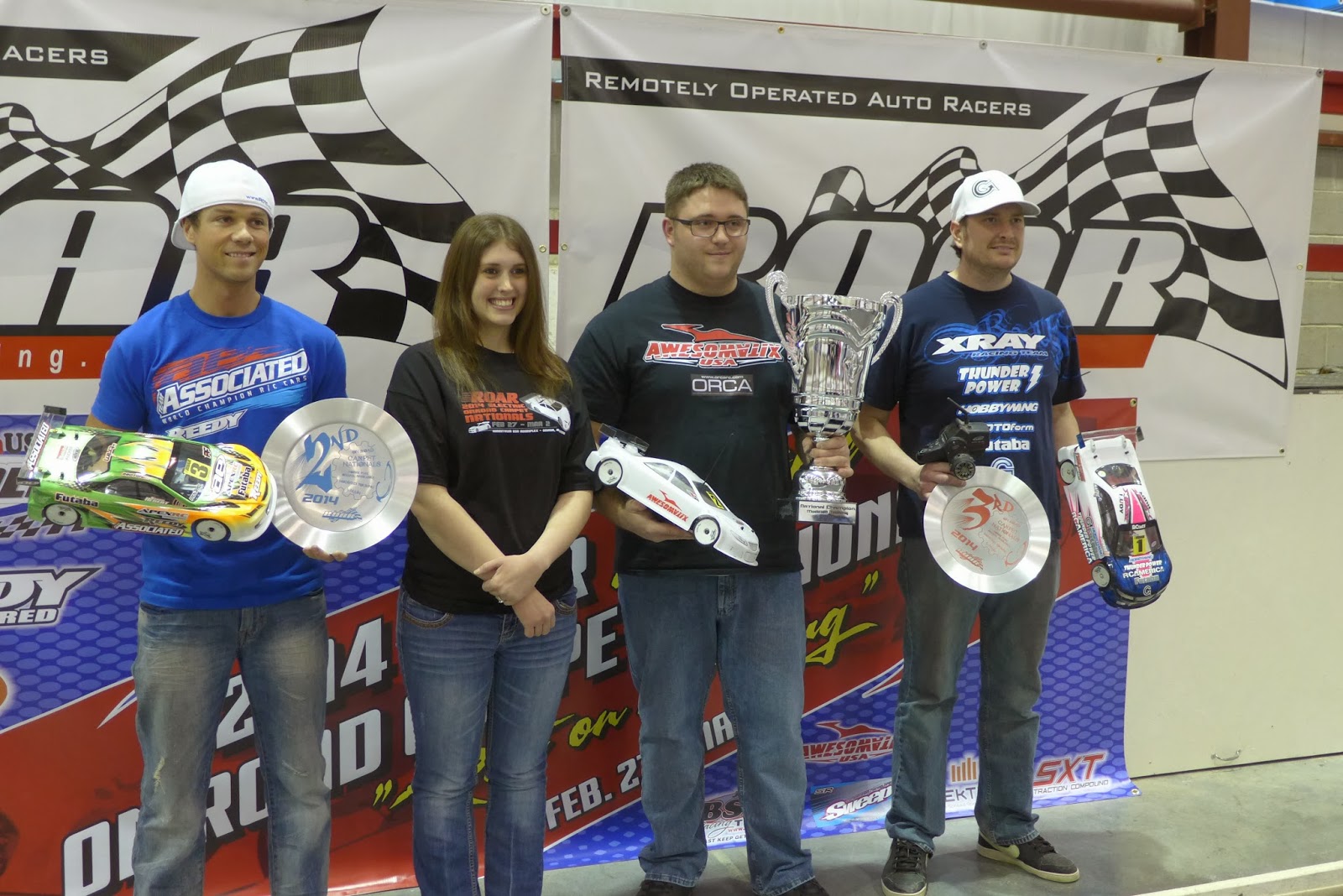 Paul Lemieux (XRay) would TQ Modified TC but only by less than 0.5 seconds over Kody Knudtson's Awesomatix A700 Evo.  Filling out the top five would be Keven Hebert (Associated), Josh Cyrul (Awesomatix A700 Evo) and Andrew Doherty (XRay).  Jake Danilchik would make it three Awesomatix A700 Evo USA Spec cars all with the new C01AL 2mm Alloy Chassis making the A final.

Paul Lemieux would run away with the win, allowing for a tight battle between Kody, Keven and Josh for 2nd. Paul would cruise to the win, with Kody and Keven following.

With two different winners in the prior mains, and Kody with two 2nd place finishes, three racers had the opportunity to win this exciting A3.  Paul Lemieux was again out in the lead with Kody, Keven and Josh in hot pursuit.  On lap 17 of the race Paul would tap in the chicane leading onto the straightaway allowing Kody to take the lead. Kody would only hold the lead for a lap before tapping out himself, but he could recover quickly. Kody continued to apply pressure on Paul until lap 25 when Paul would have his second board meeting with the chicane allowing Kody to rocket into the lead. Paul would fall back to to 3rd and work to case down Keven Hebert. Kody didn't back off the pressure as he would set the hot lap of the race on lap 35 and crossed the finish line with a 1.5 second lead of Keven.

After A3 there were three drivers taking wins, the deciding factor would then be points.  Kody and Keven both had 199 points, so the result would be determined by the best two runs time + laps.  Kody would take the win because of his faster win (A3) and faster 2nd place (A1). 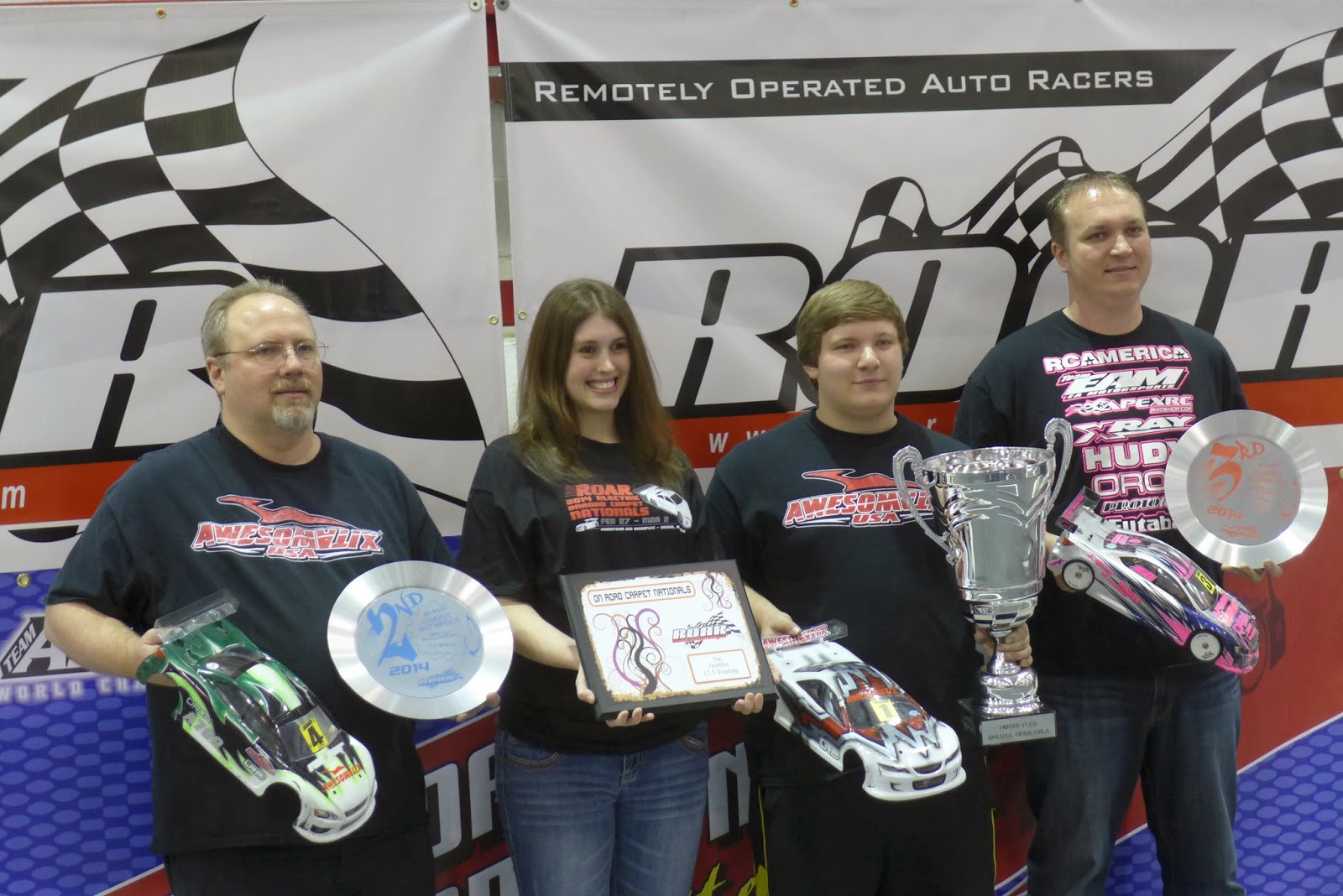 The 17.5 TC class had one of the closest girds with the top 6 drivers all recording 36 laps.  The father-son team of Brent and Kyle Klingforth would put the field on notice by qualifying 2nd and 1st.  The top 5 qualifiers actually had four Awesomatix touring cars -- with Bill Sydor qualifying 4th and Art Scrimo 5th.  Eric Anderson would qualify 3rd with his XRay.

Kyle would lead form the tone, with Brent, Eric and Bill all following.  The top three would separate out over the course of the run, but finish in that order.  Art Scrimo would rally after a rough start and finish 4th overall.

Kyle again would lead, with Brent and Eric in close pursuit.  Kyle would have an easy race after Brent and Eric had some taps up front.  The top 5 qualifiers would finish in that order and Kyle Klingforth would tie up his National title!

With Kyle sitting out, Brent Klingforth would lead from the tone easing away from Eric over the course of the run.  Brent would go unchallenged to finish a fantastic 1-2 for both Awesomatix USA, and the Klingforth family. 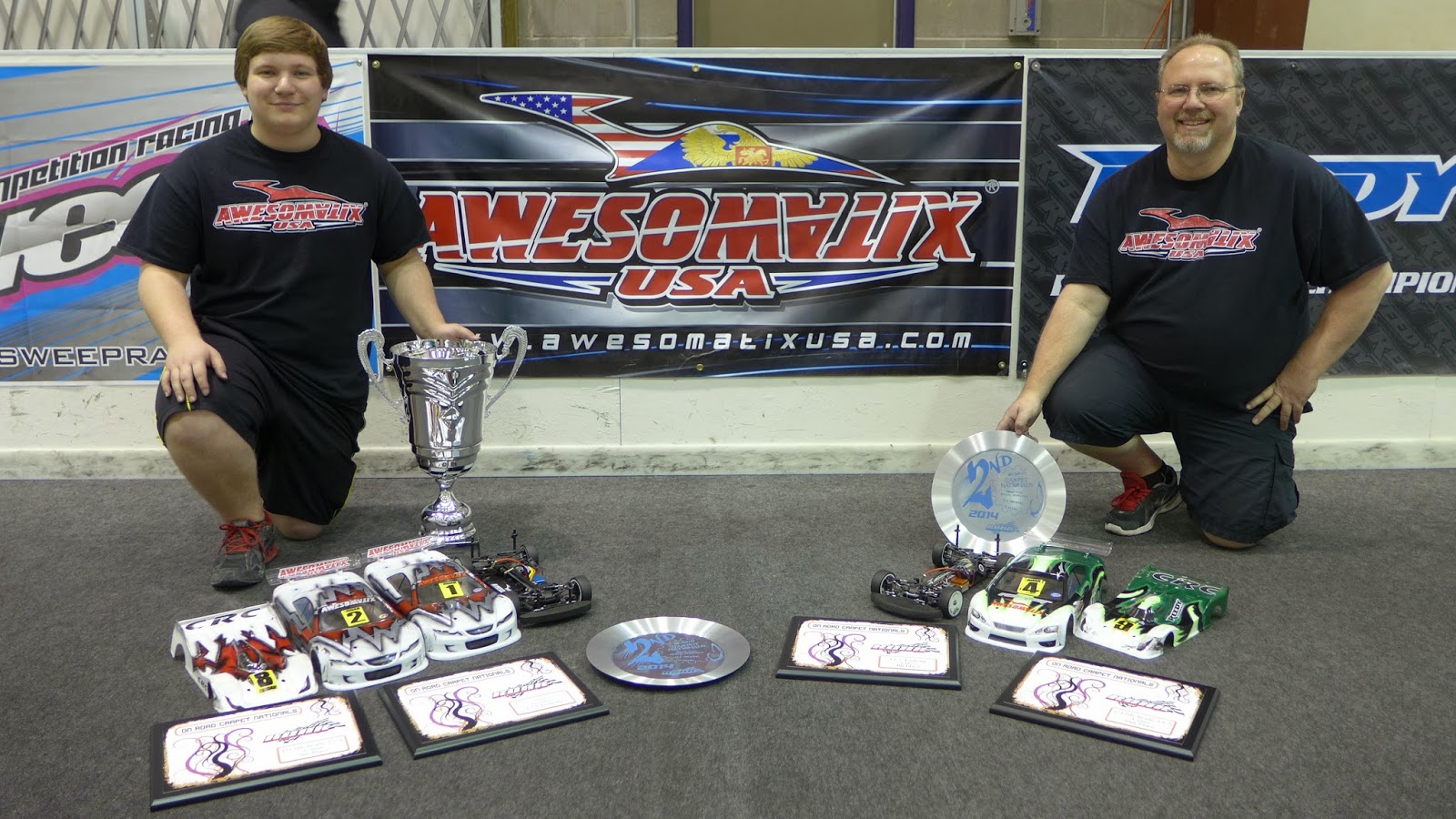 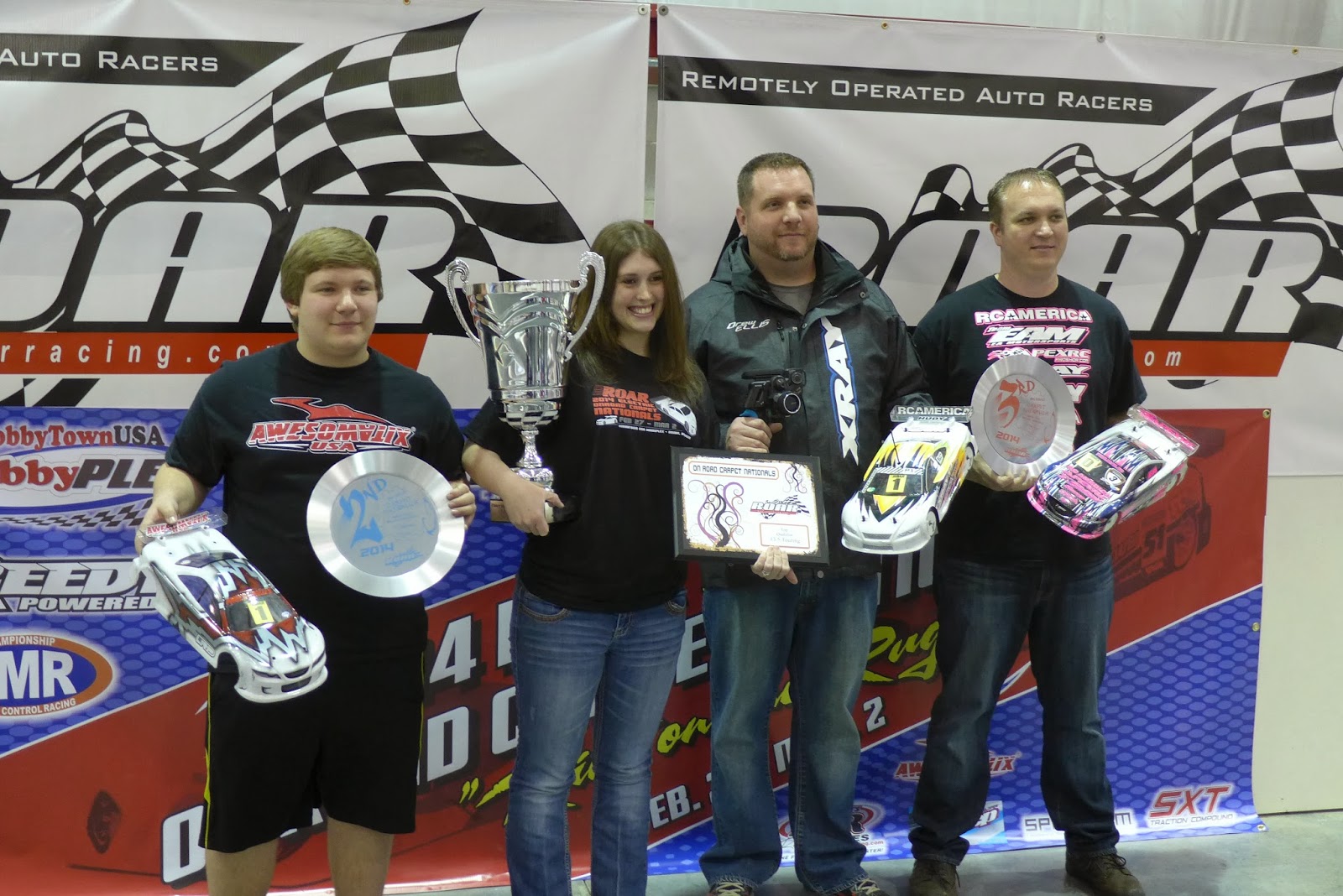 Drew Ellis (XRay) would take TQ honors by 4 seconds over Kyle Klingforth, and Eric Anderson all with 37 laps.  Three other Awesomatix cars piloted by Brent Klingforth, Art Scrimo and Jake Danilchik would also make the show.

Drew would lead from the start, but a few laps into the race his car spun out in the sweeper allowing Kyle to get into the lead.  Drew would drive hard through the pack as Kyle would tap out of the lead on lap 25 allowing Drew to take over the lead.  The top 3 qualifiers would finish in that order.

Drew had a cleaner start this time and never give up the lead.  Kyle and Eric would swap 2nd and 3rd because of taps throughout the run.  Finally near the end of the run Brent Klingforth would rally past Eric after a top to finish 3rd.  Drew Ellis took the 13.5 National Championship.

With Drew sitting out of A3, Kyle would lead from the tone.  Kyle tapped on lap 3, and allowing Eric to get by only until returning the favor on lap 4.  Kyle would drive uncontested for the rest of the race, with Eric finishing 2nd, and Tim Copp in 3rd from a 6th starting spot. 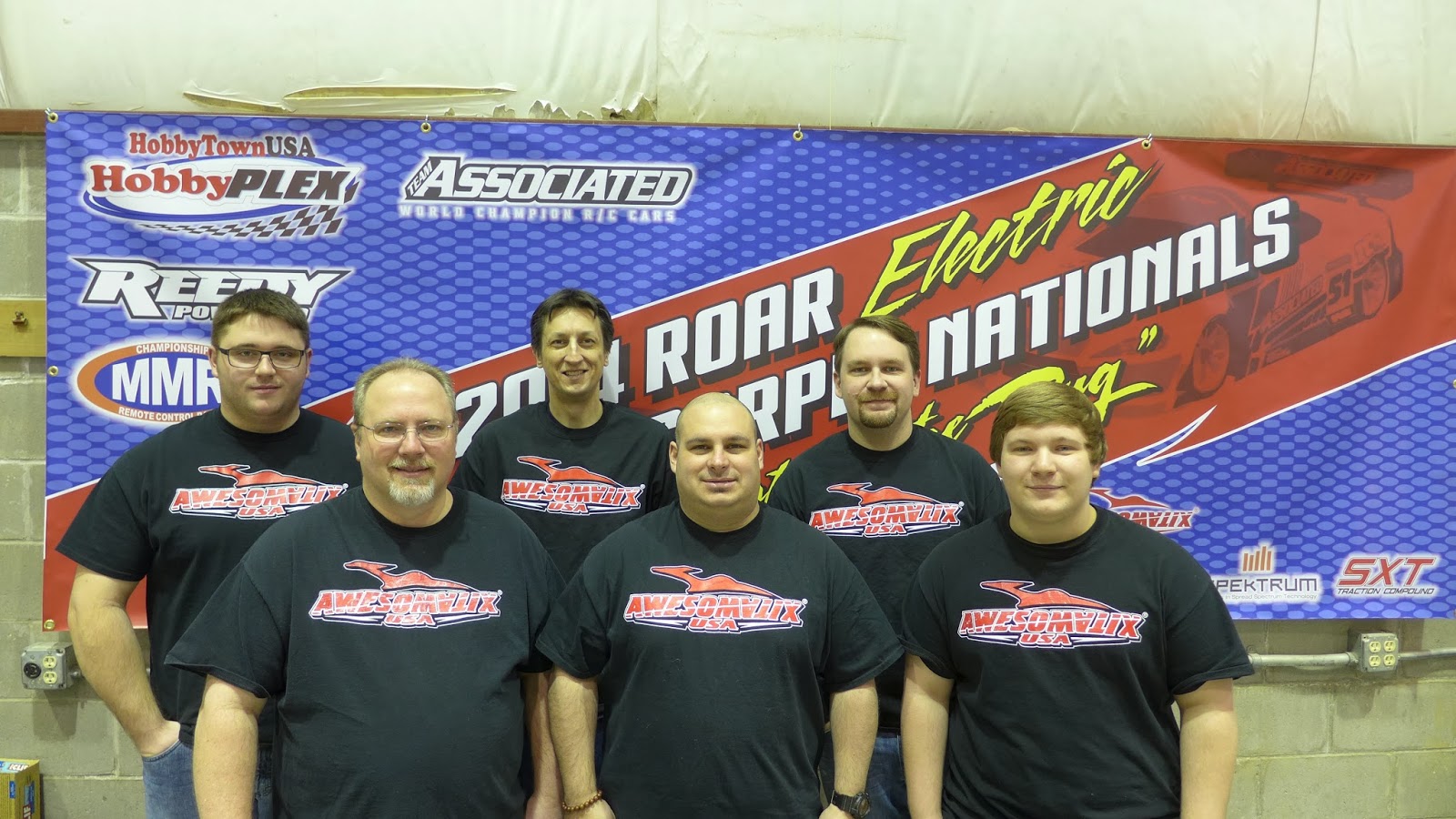 All of this weekend's success wouldn't have occurred without team work.  I cannot thank everyone's efforts enough yielding an amazing result -- the first two ROAR National Championships for Awesomatix!!
Posted by Awesomatix USA at 10:16 PM