ORCA Speedos and Batteries in stock!

Just in time for the ROAR Asphalt Nationals -- who needs some power?  Now in stock the ORCA VX Titanium 2S Speedo and their new ORCA INFINITE LIPO 7000mah 7.4V 80C 2S Lipo.  Both are ready to ship, along with Team EA Motorsports 6500 70C 2S Lipo.

Orders will be processed for the next 24 hours as we will be going to the Asphalt Nationals on Wednesday. New orders are always accepted -- and inventory is always up to date.
Posted by Awesomatix USA at 8:09 PM

Kits are in, and back orders will be fulfilled and shipped tomorrow.  All three models are available and in stock.

Please remember with the 2013 ROAR Asphalt Nationals next week, Awesomatix USA will be closed from Wednesday, May 1st to Monday, May 6th.
Posted by Awesomatix USA at 10:37 PM

Just completed a parts restock of the store.  Added inventory items for the A700L and A700EX.  A restock of A700EXL and A700L kits will arrive tomorrow.
Posted by Awesomatix USA at 9:50 PM

Don't wait to get yours!

We just placed another kit order.  Limited quantities of A700EXL and A700EX are still available.
You don't have to wait for kits to come back in stock before you order.  Back orders are available for:
Posted by Awesomatix USA at 6:51 AM

Just submitted a large parts order in to build back up parts inventories.  The different standard parts for the A700EX and A700L are included in this order along with all of the popular standard and option parts.

Posted by Awesomatix USA at 8:54 AM

Envision this - a one stop shop for all of your racing needs!  This the goal of AwesomatixUSA.  To provide all of the "good stuff" that you would find in my race cars or huge yellow pit boxes -- but now online!!

Right now Team EAM 6500mah 70C 2S lipo batteries are in stock.  Shipments from TQ Wire will be in this upcoming week.  ORCA should be around May 1st -- and we have a ORCA VRITRA VX 2S Speedo pre-order currently available.
Posted by Awesomatix USA at 12:53 AM

The Seattle RC Racers had their one large event last weekend. Its called the Emerald City Classic. Typically it is a multi-day event but we couldn't rent anything for more than a day so we did it at our normal venue as a one day with single mains. 117 entries and regional talent from Oregon and Canada came to duke it out here in WA. There where 7 racers running the Awesomatix A700 touring cars.

In Stock Touring car A700's were qualified second (Mike Malkinson) and fourth (Frank Bartilozzi) in Stock TC. Mike Malkinson, in the Yellow car, finished 2nd in the A-main but unfortunately Frank pulled his car off in the main. Devin Patterson took the TQ + win.

In Modified Touring car, Jake Danilchik qualified 2nd behind the TQ Kody Knudtson and brought the his A700 home in 2nd less than 1 second behind Kody. Jake's car is the white and orange car in the video.

Thanks to Jake Danilchik for the write-up.
Posted by Awesomatix USA at 8:10 AM

All back orders fulfilled!

Just wanted to let everyone know that all of the Awesomatix race car kit back orders have been fulfilled.  The Store inventory is correct and ready to ship...
Posted by Awesomatix USA at 4:22 PM

Late tonight we where able to pick up our latest stock order.  It is full of kits and some parts.  All three types of Awesomatix touring cars are now in stock!  Existing kit back orders will be fulfilled first.  We already have our A700L Quality Assurance form available.  The A700EX form will be available tomorrow.
Posted by Awesomatix USA at 10:37 PM

Good luck to all of the competitors at the 2013 Mile High Indoor Champs at 5280 Raceway in Denver, CO.  Hopefully the prize recipients will enjoy their Awesomatix USA T-Shirts or Gift Cards.
Posted by Awesomatix USA at 10:32 PM

The Seattle RC Racers are hosting their 2013 Emerald City Classic this Saturday, April 6th in Seattle, WA.  Team Driver Jake Danilchik will be leading the charge with a field of 6+ Awesomatix touring cards looking to attend the event.  Good luck to all of the racers -- and especially the Awesomatix drivers.  Hopefully you'll win one of our Shop.AwesomatixUSA.com $50 Gift Cards within their raffle!
Posted by Awesomatix USA at 7:43 AM

Today yet another stock order was placed.  This time around we will be bringing in not only the A700EXL but also the A700EX and A700L kits.  These two new kit styles have been added to Shop.AwesomatixUSA.com already and are available for back order.

Additionally, we are expanding our free shipping offer to all three kit styles.
Posted by Awesomatix USA at 10:19 PM

Restock and introduction of back order for car ktis

30 new products where just added to Shop.AwesomatixUSA.com along with the re-stocking of popular items, like our car kits and dampers.

In order to help allow people to get their hands on an Awesomatix touring car we are introducing the ability to back order a car kit.  You will pay for your kit in full, and your order will ship when it is complete (i.e. you kit arrives).  The introduction of back orders will allow you to secure your car, and not have anyone "cut" the waiting line.
Posted by Awesomatix USA at 12:25 AM

Just wanted to share a design mock up of our new Awesomatix USA t-shirt.  It will be available in sizes Small to 3-XL.  Hope to have them next week... 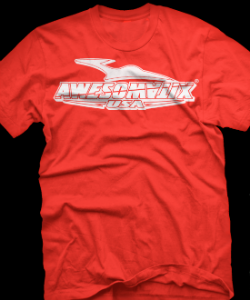 Awesomatix USA does it again -- supporting the tracks that provide everyone a place to race!  We will be the Modified Touring Car class sponsor for the 2013 ROAR Asphalt On-Road Nationals being hosted May 2nd to 5th at Village Raceway in Royal Palm Beach, Florida.

The modified racing classes will draw special attention this summer as drivers strive to qualify for a spot to race in the 2014 IFMAR On-Road Worlds which is being offered to ROAR in North America.
Posted by Awesomatix USA at 11:00 AM

We'll be digging through the Awesomatix USA inventory to prevent this problem from being spread further into the environment.  If any North America customer has the SPR01 springs that they suspect to be wrong please contact us.
Posted by Awesomatix USA at 6:00 AM

This Saturday, April 6th, Crispy Critters Raceway in Fairfield, NJ is hosting a Trophy Race on their new indoor Carpet Track.  Awesomatix USA will be in the house racing and support our local racers.  We are also bringing along some Side Piece Racing parts and Shop.AwesomatixUSA.com Gift Certificates in support of their event.
Posted by Awesomatix USA at 9:09 PM