"Awesomatix USA did work at the ROAR Region 2 series Leg 2 @ Jackson. in 17.5, A700's locked out the top 3 in qualifying (Larry, myself, FJ respectively). This is particularly impressive I think, as the 17.5 field was so stacked a former ROAR 17.5 TC champ missed the show. In mod, we had 3 cars again in the A, with myself TQ, Matt Abey 6th and FJ 7th.

I won the first 2 mains in mod, and FJ had better luck here, improving to 4th, and Abey holding steady at 6th. Mike Haynes and Robbie Dodge completed the mod podium.

FJs 17.5 setup is money, I drove his car after the mains. Very easy to drive. Both FJ and Larry ran that setup. My mod setup is the same way I'd like to think, I know Abey liked it." 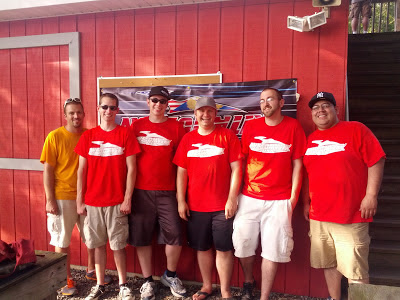 Thanks to Mike Gee for the report and the awesome performance this past weekend. Also big thanks to my friend, Larry Fairtrace, for taking my "rent-a-ride" for a spin and showing me that he is 5 seconds faster with an identical car :). Congrats also go out to Jerry Perez and Joel Vautour for their strong B-main runs in 17.5T.

The final leg of the ROAR Region 2 Championship is Saturday, July 27th at John's Mobile RC/Middle River Hobbies.  The overall winner of the 17.5T touring car class will win an Awesomatix USA sponsorship and a A700 touring car!  Hope to see even more Awesomatix cars in the pits next month!!

Posted by Awesomatix USA at 9:40 PM