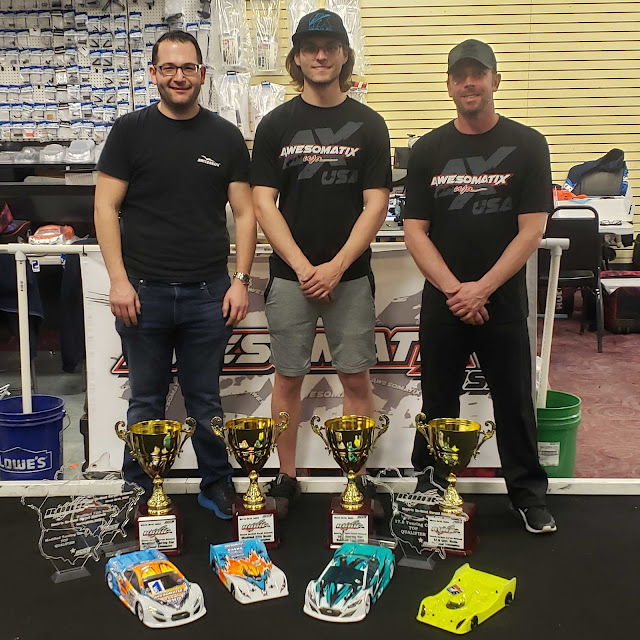 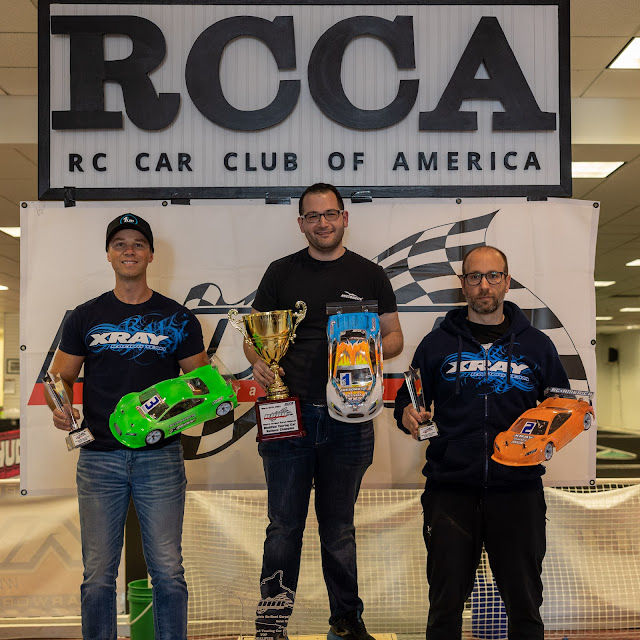 Awesomatix's Sam Isaacs would TQ the event in front of Chris Adams and Keven Hebert.  AwesomatixUSA drivers Kemp Anderson and Michael Toth would qualify in the top 10 - 4th and 8th.
In the A-main, Sam would take the first two wins to rack up his 6th consecutive ROAR Electric On Road Carpet National Championship in Modified TC -- 2017, 2018, 2019, 2020, 2021, 2022.  Congrats to Sam!
Triple A-main finishing order- 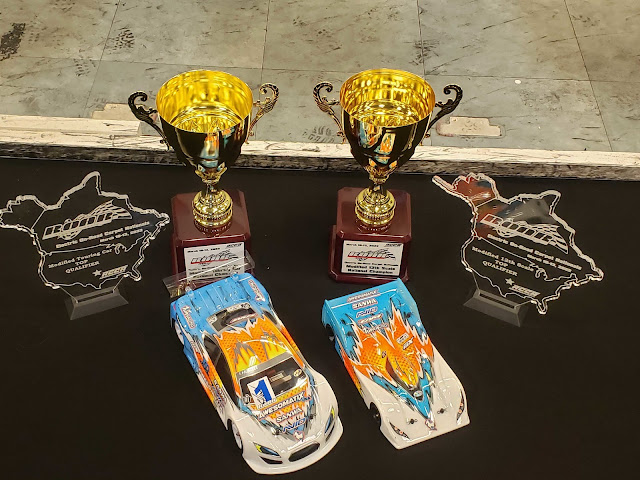 Awesomatix Team drivers Sam Isaacs and Donny Lia were in a class of their own at ROAR Nationals.  Sam would TQ round 1, Donny would re-set in round 2 and Sam would re-set for the final TQ in round 3.
Sam would lock out the A-main win in the first two races.  Donny would take home 2nd place overall.
Congrats to Sam for his second consecutive ROAR Electric On Road Carpet National Championship in Mod 1/12th!
Triple A-main finishing order- 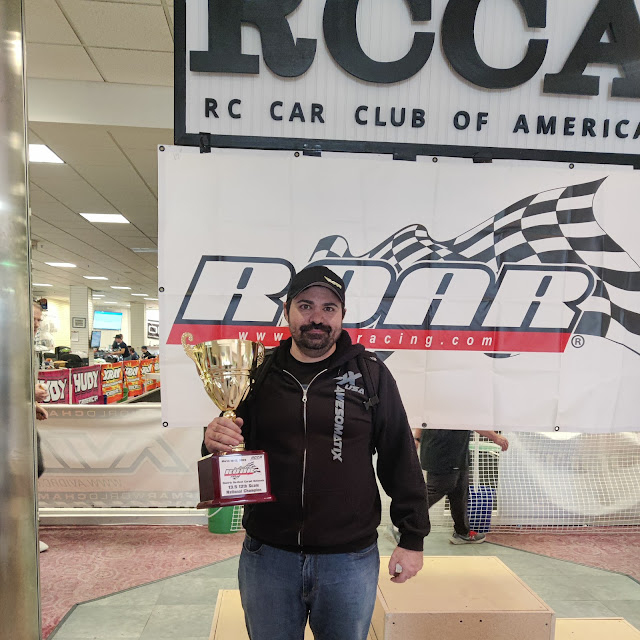 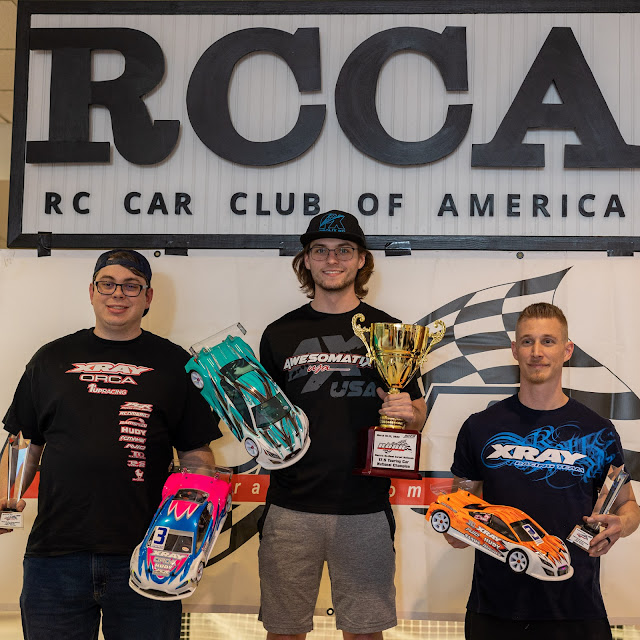 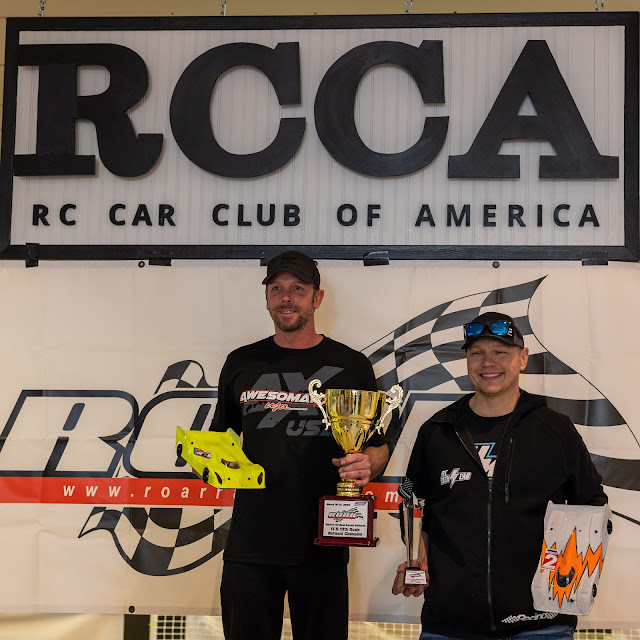 Qualifying for Stock 1/12th would be controlled by Awesomatix's John Dickson who set and re-set TQ in round 1, 3 and 4.  Fellow Awesomatix driver John Wiita would keep John honest in qualifying.  Awesomatix drivers would also qualify 5th / Michael Hanulec, 6th / Joe Trandell, 9th / Fabio Evangelista, 10th / Clayton Young.
In the A-main there would be aggressive racing action.  A1 was won by Dickson with Trandell racing up to 2nd.  A2 was won by Trandell with Wiita in 2nd.  A3 would be the showdown for the overall win and although Wiita would win A3 the final point and tie break tally would make Joe Trandell the winner!
Congrats to Joe Trandell on his 3rd consecutive ROAR Electric On Road Carpet National Championship in Stock 1/12th!  2020 (Roche), 2021 (Awesomatix) & 2022 (Awesomatix)
Triple A-main finishing order- 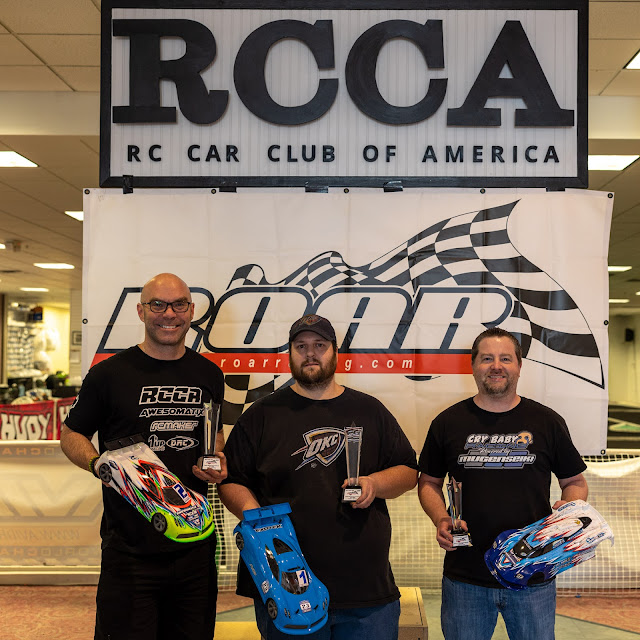 Awesomatix driver Michael Skeen would take the TQ over fellow Awesomatix driver Marc McGurren.  David Panter would round out the top 3 in qualifying.  In the A-mains these top 3 would stay unchanged.  Congrats to Michael!
Triple A-main finishing order- 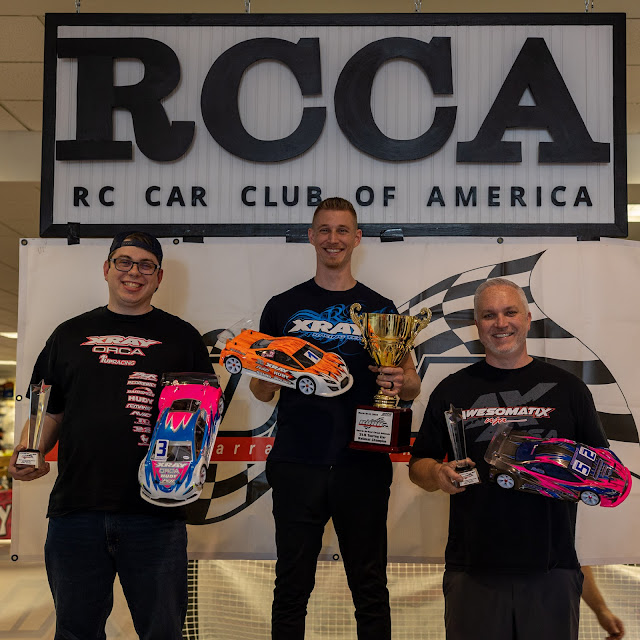 Stock TC qualifying would be intense but shockingly the top two runs came out of Q1 by Robbie Dodge and Awesomatix's Eric Anderson.  It took until Q4 to have Michael Gee and Awesomatix's Craig Xavier to get onto the 34 lap runs like Robbie and EA.  Awesomatix drivers would take the majority of A-main spots with 6th / Michael Skeen, 7th / Jeff Rowland, 8th / Mark McGurren, 9th / Clayton Young and 10th / Brent Klingforth.
In the A-main Robbie would take A1 and A2 wins.  Gee would win A3.  Eric Anderson would secure 3rd.
Triple A-main finishing order-
Posted by Awesomatix USA at 11:55 AM