The 2017 ROAR Carpet Nationals held at 360V2 RC Raceway in New Rochelle, New York was a major success!  The track crew, including Donny Lia, Sal Amato, and Alex Valdes, among others, did an incredible job to prepare the track and facility in what was one of the best ROAR Nationals in recent memory.


For Team Awesomatix USA, the racing went as well as we could have ever asked for—taking down wins in 17.5 Touring car, Modified touring car, as well as USGT, and 2 TQ’s to go along with it! 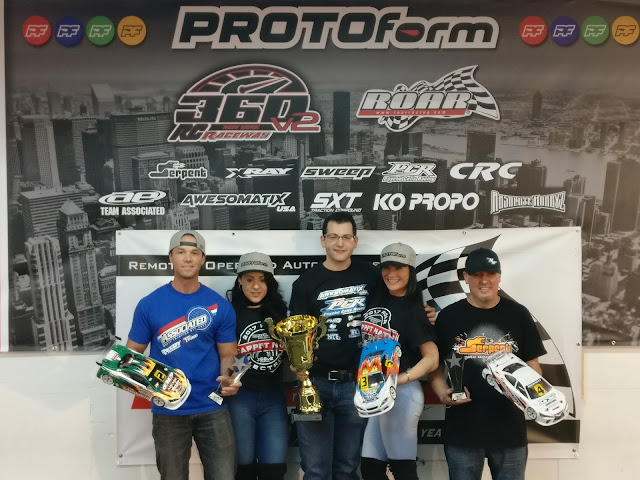 Modified TC was the most exciting class of the weekend, with several National Champions in the building locked and loaded for some close racing.  After four rounds of Rocket Round qualifying, it was the XRay of Paul Lemieux with a perfect drive to take the pole, followed closely by the Team Associated ride of Keven Hebert and the Awesomatix of Sam Isaacs rounding out the top 3 starting spots. For Awesomatix USA, we would have a total of 4 cars in the A-main: Sam Isaacs 3rd, Mike Gee starting 8th, Kyle Klingforth in 9th, and Donny Lia in 10th, rounding out the grid, filling nearly half the A main lineup!

The set of triple A mains for modified touring was sure to be interesting, with the best 2 of three races to count in typical ROAR Racing format. A1 would start in grid order, with a perfect start for Paul, Keven, and Sam pulling away from the rest of the field. The trio would remain in grid order until a mistake by leader Paul Lemieux flipping his car. Keven would assume the lead, which he would hold until the finish line to claim A1 in a close battle with Sam only 3/10th of a second behind at the buzzer. Surely, A2 would be even more interesting!

Modified touring leg 2 began in a similar fashion, with a perfect start for nearly the entire field, with the top three having some room to do battle! Paul would tap the carousel onto the straight away allowing Keven to assume the lead, followed closely by Paul and Sam. Paul and Sam began to close on the leader, and an incident between Keven and Paul on the left side of the track gave Sam plenty of space to go through and cruise to an A2 victory. The overall title would come down to A main number 3, with both Keven and Sam having one victory apiece.

After an intense leg 2, A3 proved to be just as entertaining and action packed. As in the previous 2 mains, the top three quickly broke away from the rest of the field to race for the title. After two races, Sam led in points with a first and a second place finish, with Keven the only one who could challenge Sam for the overall title, having a first place result already to his credit. As the race ensued, Keven was able to make a nice pass on the inside of Lemieux at the early stages of the race. Sam continued to apply serious pressure to the back of Lemieux for the second position. Slightly over halfway through the race, Paul and Sam put on a charge to catch the leader, Keven, and began to close on him. With less than 2 minutes to go, Keven would put his car on 2 wheels through the carousel, throwing his car off the racing line, allowing Paul to take the inside line. Keven, attempting to regain his first position, would run into the back of Paul, causing his car to flip and Paul’s body to tuck. Sam, just half a turn back, was able to drive through the commotion and cruise for the last minute and a half to take A3 and the Modified National Championship Title! In the end, Awesomatix USA had 4 cars in the A main final, with Sam taking the W, Mike Gee in 8th, Donny Lia in 9th, and Kyle Klingforth rounding out the main in 10th. 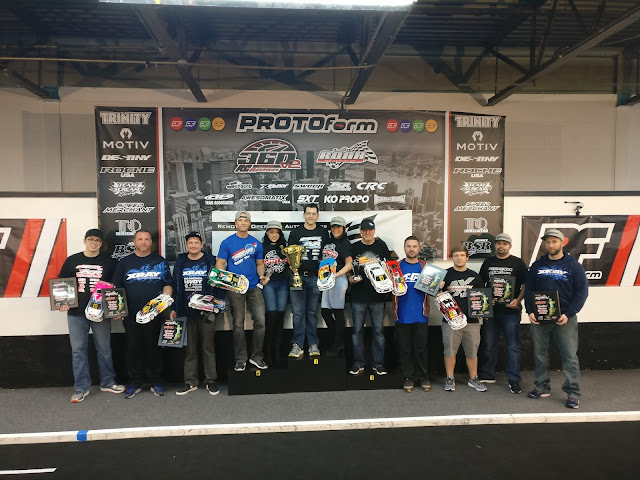 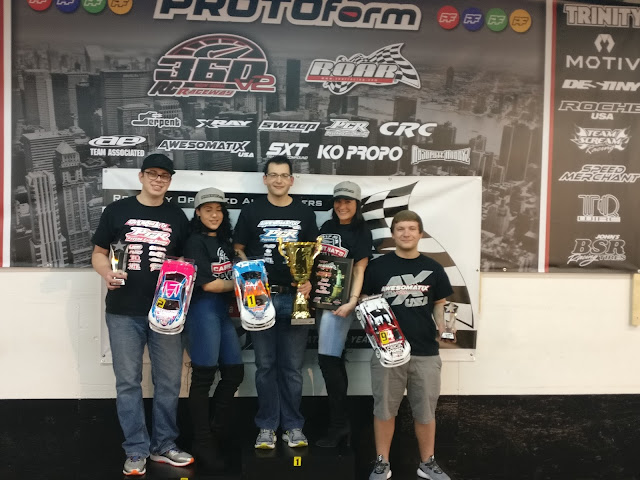 The 17.5 TC division once again proved to be the largest class with over 50 participants. After 4 rounds of close and intense qualifying, Sam Isaacs was able to take top TQ honors with teammate Mike Gee keeping him honest, only about a second behind. Kyle Klingforth would put his name out there to qualify 4th on the grid, running the A800X behind Xray’s Eric Anderson. Bill Sydor qualified 7th and Sal Amato would round out the A main grid in 10th for a total of 5 Awesomatix cars in the show—more than any other brand!

Qualifying order for the A-main:

The triple A mains in 17.5 TC played out as they started.  Sam was able to take tone-to-tone victories in A1 and A2 to take the overall National Champion title! Mike Gee proved victorious in A3, taking a tone-to-tone win to finish in the second spot overall!  Kyle Klingforth, racing closely with Eric Anderson, was able to take third on the podium after some excellent drives. All in all, 17.5 TC was an Awesomatix and Mon-Tech Racing USA podium sweep, with Billy Sydor finishing 6th overall and Sal Amato in 7th. 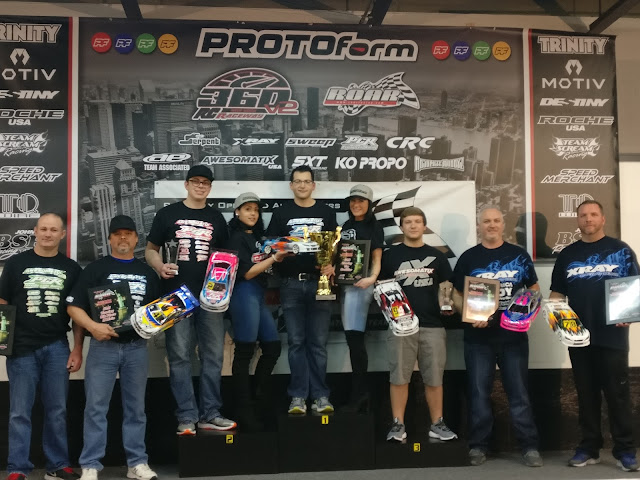 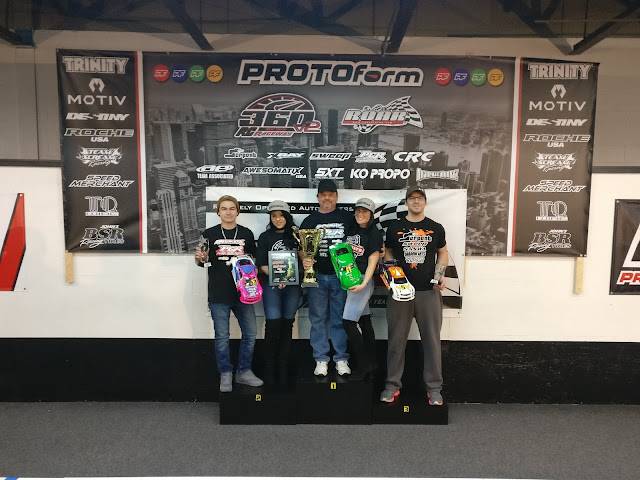 Awesomatix USA drivers showed great pace in USGT, with Billy Sydor taking the TQ honors by a few second over Jared Mowery and Awesomatix driver Brandon Hughes. Courtney Townend would qualify 8th with Ralph Morella in 9th to add two more Awesomatix cars to the A main grid. The main event was shaping up to be a great show, and an excellent chance for an Awesomatix victory with 4 cars in the A final!

Bill Sydor would lead tone to tone in A1 to take a commanding victory. An early mistake in A2 by Sydor would put Brandon Hughes, running the A800A, to the top spot, which he would hold for the majority of the race until an incident in the chicane with traffic, causing him to drop down the order. This allowed Sydor to again take over that top spot and claim the USGT National Championship with an A2 win! A great A3 win earned Brandon Hughes 2nd overall, a great result for the young up and coming racer. Ralph Morella would move from 9th on the grid to finish 6th, and Courtney Townend would wind up 8th overall. 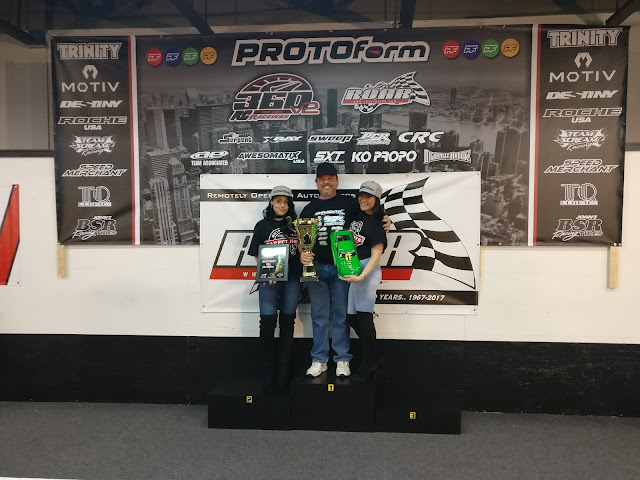 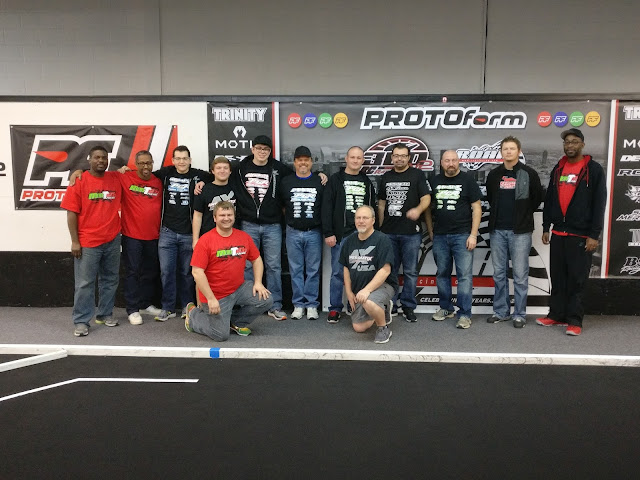 The Awesomatix team showed great teamwork, paying off in three race victories and National Titles! Next up is the 2017 Mile High Indoor Championships at 5280 Raceway, in Denver, Colorado! 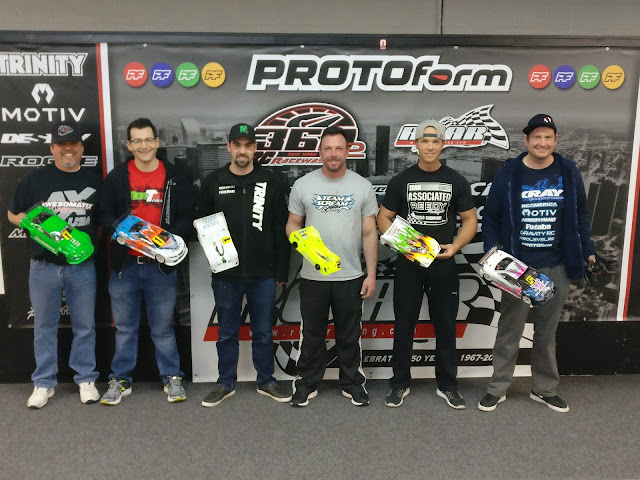 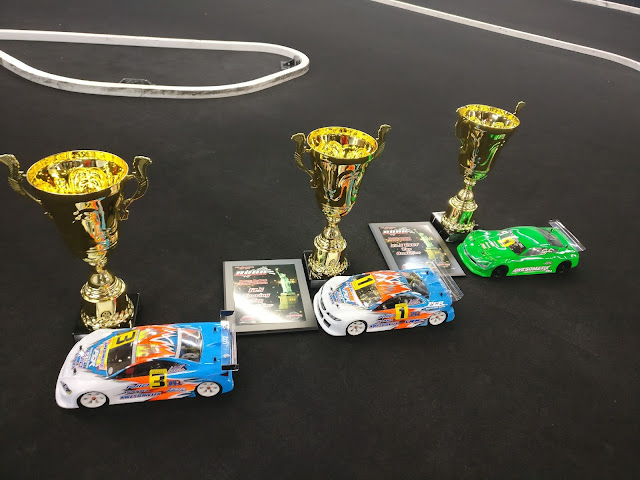 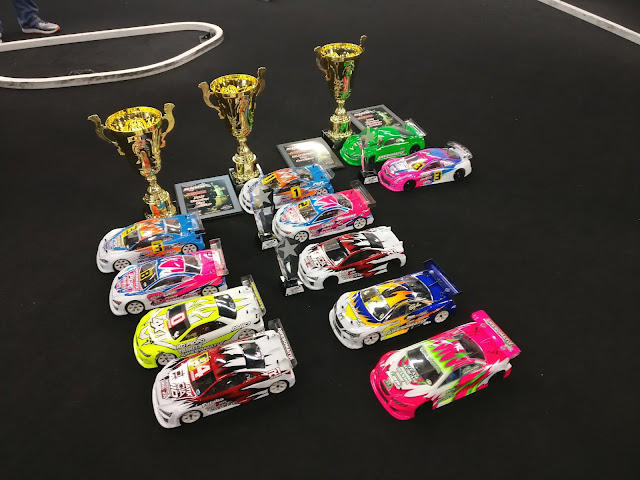 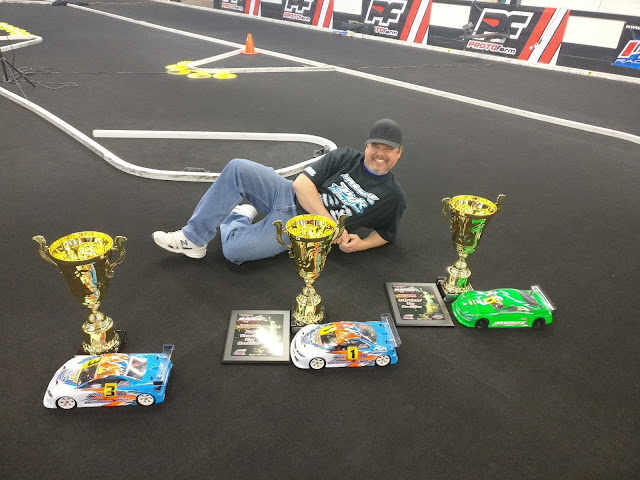 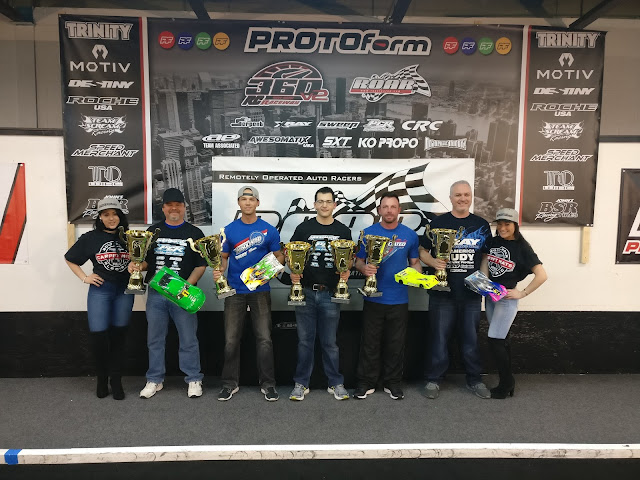 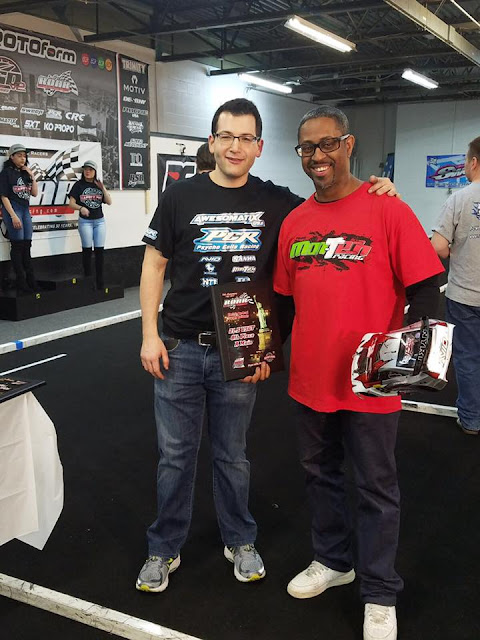 Posted by Awesomatix USA at 6:31 PM