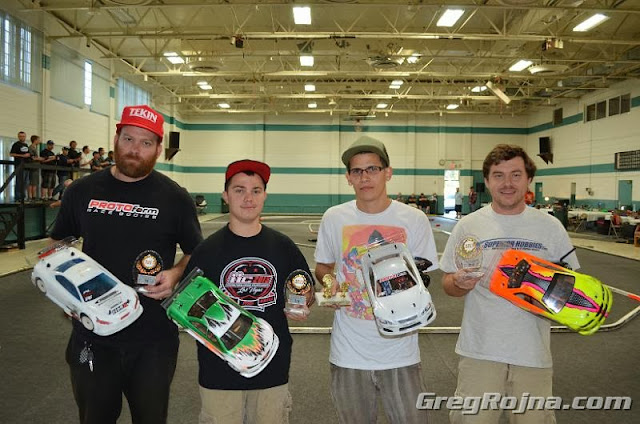 The 2013 Minnreg Turkey Shoot was held this past week by Mike Boylan and company in Florida.  It is a three day race featuring Oval racing Saturday and Road Racing on Sunday.  This is one of the few times over the year that Flordia road racers go indoors and compete on carpet.  In the largest and most competitive Road Racing class - 17.5T Rubber Touring - Roberto Falcon, in his first outing with the Awesomatix A700L USA Spec, hung tough through qualifying learning how to tune and setup his car while battling round after round for TQ in the class.  When qualifying was finished TJ Bradley was the Top Qualifier, with Mark Burt 2nd and Roberto Falcon 3rd.  All three drivers were separated by less than one second.  Prior round TQ, Cory Parsons, would end up 4th qualifier after the final rocket round.

In the A-final, TJ, Mark and Roberto (2nd white car) got out front and started to break away from the back.  Roberto got by Mark and started chasing TJ.  Half way through the race TJ piped it and the top 4 cars all collided.  Roberto was the first out of the pile with Cory in hot pursuit.  Roberto held up to one minute of pressure from Cory until he tapped out too allowing Roberto to cruse to the win, followed by Mark and finally Cory taking 3rd.

Roberto summed up his first race experience by saying --
"Every adjustment I made to the car only got better .. I'm really impressed.  Well engineered to say the least"

Heading into Snowbirds Roberto should feel really good about his past weekend's performance.  Now all he needs is a t-shirt and a non-white paint job!  Congrats again Roberto!! 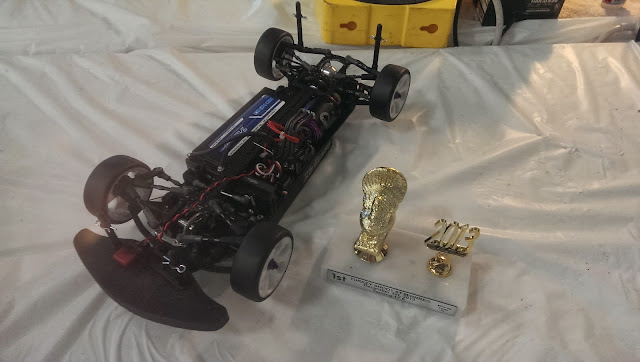 Posted by Awesomatix USA at 7:39 PM