After rescheduling this race due to rain a few weeks ago, ROAR Region 5 took to the track again. The race was hosted by TSRCAR at the Hamilton County Fairgrounds in Cincinnati, Ohio. Team driver Monti Panzica reports --

"The day stared off with rain so I was not able to do any testing with FDR in 17.5T Touring. Dave Johnson showed (VBC driver & 2012 ROAR National Champ in 17.5T Asphalt) so I was sure he was going to be fast. I missed tq by 0.7s to Dave after three rounds of qualifying. I felt my car lacked a little punch out of the corners so I made a gearing change for the main.  In the main I was battling for the lead and took it from Dave but I was drilled a few times in the next corner.  After marshaling I came back to finish fourth and set fast lap in the main.

In Modified Touring I tq'd by 7 seconds and on my own lap, I was also able to bring home the win. Dave Johnson finished 2nd." 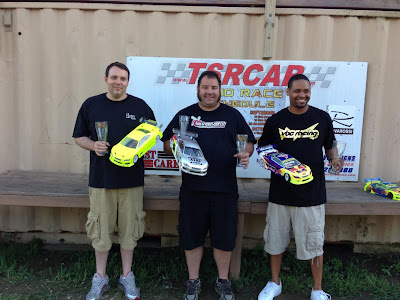 Due to some unfortunate tie-breaking rules, Larry's dual TQ + Wins wasn't enough to give him the overall win for the series after not attending the first event.  I think everyone who attended the event knew who the real winner was! 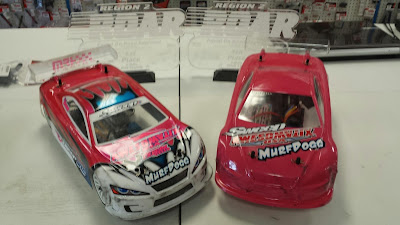 The top 3 in Modified TC for the tree race series was:

Awesomatix USA sponsored the 17.5T Touring class for this Region 2 series, and offered a sponsorship + Awesomatix kit to the overall winner.  Region 2 is known for their super fast stock racers, so helping bring another racer into the family is goal to build up the team.  The two top in the series turned down the sponsorship due to existing committments, but we are happy to welcome Danny Jenkins to the Awesomatix USA family of racers.  Danny is a well known regional and national competition who has made many stock A-mains in past national events.
Posted by Awesomatix USA at 11:11 PM